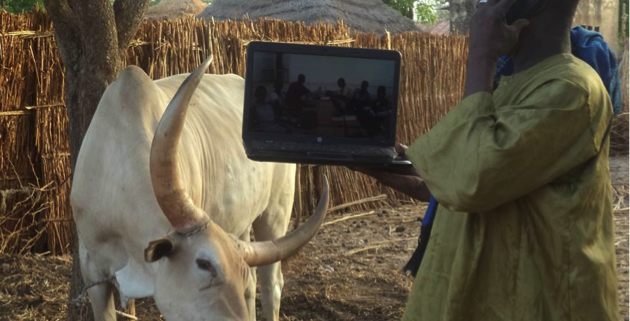 Daral Technologies, an innovative project in Senegal, stems from the need to get an overall idea of livestock farming statistics and identify farmers and their livestock. There is no such initiative in this country.

Who owns the animals? What kind of animals are they? Where are they located? If we could answer these questions, we could set up a digital identification process for both the owners and the livestock itself. This, in turn, will help to gain the much sought-after statistic in the sector, all the while solving the problem of thefts of animals. In 2007, for example, in Senegal the African horse sickness generated a two billion CFA franc damage because of the misinformation of farmers about how the illness could be prevented and treated.

How does it work?

The web and SMS application has three key functions.

According to Amadou Sow, Peul farmer and creator of the project, “the first step is to identify the breeder by means of a digitized system, collecting personal data (such as name, pictures, place of residence, telephone number and number of animals in stock).” “Upon registration” Amadou goes on, “a unique owner identification code is generated. It can then be tattooed on the animals so that they can be traced back to the owner in case of loss or theft”.

The media library is another key feature of this project, allowing for the prevention of livestock epidemics and the prompt spreading of preventive actions in rural areas. A mobile application allows the farmer to shoot videos of a sick animal and send it to the platform managed by experts and veterinarians from the farming Directorate. “After diagnosing the illness” the platform inventor quips “the experts send a message to the area referral center closer to where the video was sent from, detailing the recommended course of action to take. Close-by referral centers get both the original video and the one from an expert about how to deal with the illness.In this way, the awareness of the diagnosis spreads to other villages in the area, informing farmers about the existence of a particular disease.”

The project has entered into a partnership with the Senegalese Ministry of farming, which needs to collect data so to draw up reliable statistics for the sector. There are still no statistics on the industry, and it would be extremely useful to gather information about one of the most developed sectors of the country.

The third key feature of the project is the provision of an SMS service to the Ministry of animal husbandry for alerting farmers on topic such as theft of animals, vaccinations, diseases, etc. Due to the identification information collected for each breeder, the Ministry will gain access to their phone numbers and use the platform as a means of transmission of urgent messages and communications to wide scale. However, the revolutionary breeder did not stop here. He decided to go for more and has partnered with Microsoft for this project. Microsoft, on the other hand, provides computers, internet connectivity, and training to educate local project managers using Daral Technologies project village centers.

Centers are strategically set-up in locations where farmers meet once a week for animal markets (also known as Daral, in fact). In this way, farmers in the area will get in touch with the information managed by the centers thanks to airing videos in maxi screens for everybody to see.

In Senegal, and throughout Africa in general, there is an increasing number of projects and initiatives for the development of web and mobile applications helping farmers and fishermen to work at their best. Let us not forget that, according to Africa Progress Panel report, the continent could feed the growing populations inside its urban areas and address the global food demand. The so-called ICT4Agriculture, i.e. the set of technological innovations developed to facilitate access to information and communication between stakeholders working in the primary sector, is an increasingly effective tool for the improvement of the industry.
Share this entry