In the next 50 years we will exceed 9 billion population on Earth and we should produce more food than was consumed in the whole history of mankind, while soil, water and air are more and more polluted. So what we can do?

The discussion is not about the problem -unfortunately- very clear: from the 2025 two thirds of global population will already suffer for hydric scarcity and in 2050 we will have exceeded 9 billion inhabitants on earth (and today we are 7.3 billion); if we won’t find other ways to live, cultivate and consume, the majority of the population will be sentenced to a life of hardship.

As well narrates the scientific journalist Alan Weisman in his book “Countdown:Our Last, Best Hope for a Future on Earth?”, in 2050, if there won’t be relevant discovers in the energetic field and in the food production systems, there won’t be enough food for all. Until we were content using the sun “conversion” to nurish us, we grew with very low rhythmes. In 1815 we were a billion, in 1930 we redoubled, with the oil discover and the use of hydrocarbons to generate energy we became 5 billion in 2013 and, though the settlement phase that is expected, we will be among 9 and 10 billion in 2050.

In the next 50 years, so, we should produce more food than the quantity consumed in the whole history of mankind.

But how? This is the starting question of Expo 2015 that, beyond the possible deviations as culinary and exhibist kermesse, tried even to give scientific answers and spread awareness about this problem.

The most interesting answer, according to me, because already amply practiced, even if less known, is the one in Belgium Pavillion (and in Kazakhstan, Qatar, Oman and -in part- in Usa), or rather, the hydroponic (or waterponic, or aeroponic) agriculture practice, or, the agriculture without soil, with little consumption of water and without pesticide (and you shouldn’t confuse it with the hydroculture, the cultivation of plants in water).

In the hydroponic process, land is replaced by very small quantities of an inert substratum (expanded clay, perlite, coconut fibre, stone wool and so on) placed in tubes or columns in which flows water, due to a pump (water is totally recycled). The necessary nutrients are added in order to integrate all the essential elements to the plant for growing. In the most advanced formulas, the pumps are connected to solar panels, that allows not to consume energy and everything is computerized, humidity, nutrients, temperature. The hydroponic culture allows plentiful crops, further than seasonality, even in arid zones, and guarantees a total hygienical-sanitary security during the whole year.

Indeed, organic agriculture very often underestimates the pollution of land, of groundwater, rainfall and air, which are not really controllable.

For example, the good but not strictly rational trend of urban balcony garden, responds to the need of people to regain control over production of their own food, but it takes no account of the concentration of exhaust-gas, ppm and pm10 that than we find in “organic” tomatoes cultivated above motorways. 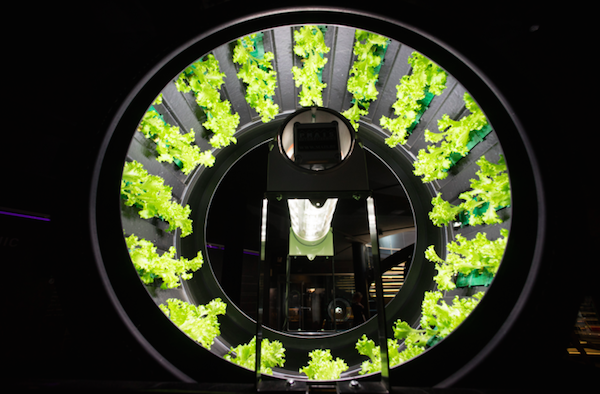 Hydroponics solve this problem. It is able to grow indoors, at home, lit with LED lamps (also connected to solar panels). This completely removes the need of pesticides, herbicides and fertilizers, and allows to continuous harvests, in every season, ensuring very clean food.

Even the design of the structure can satisfy every whim: vertical, horizontal, cube, pyramid columns, the only important thing is that the roots of the plants are irrigated by surface or per spray irrigation with water and nutrients.

Actually, is a very old technique, dating back to the ancient Aztecs, and it is already practiced on a small scale in many countries for over 20 years.

However it is more complex to manage than hydroponics because requires a delicate bacterial balance and is less appropriate for large scale installations.

The results of these cultivation methods are astonishing: 500% more productivity than ground crops, 90% less consumption of water, 50% faster growth, 40% fewer work, 30% less of required energy (also, hydroponic and aquaponic systems can be placed anywhere, even in the city, in an abandoned factory or at home, and can finally achieve the principle of “km0 food”).

In Italy, in the Province of Rieti, the Ferrari Farm has developed hydroponics crops in sterile and hermetic greenhouses, fully self-produced and computerized.

These techniques are not from sci-fi movies as “The Martian”, if you take a tour on Google you will find countless examples already in place: from large agricultural systems to small household productions in which the system is even self-produced with recycled materials.

The logic emerged at Expo, and already promoted by several companies in the US, is that the hydroponic cultivation system may become a new “household appliance” to produce our own vegetables in an autonomous, safe, totally pollutants free and Km0 way. 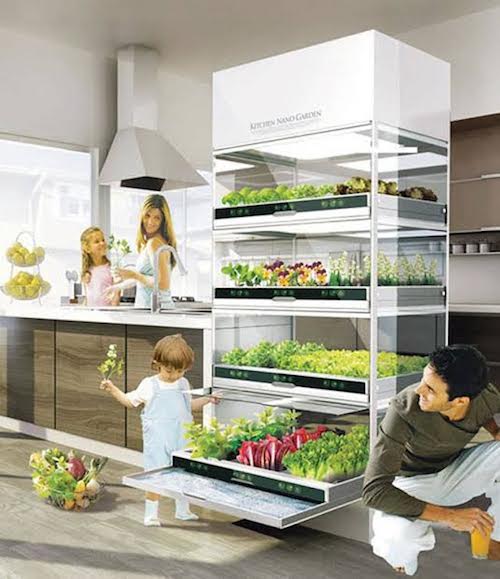 From non-techie to ICT4D enthusiast